Since its inception in 2005, the NISE Network has developed a wide range of activities, programs, and exhibits for public audiences that have been implemented within over 500 institutions across the country. Two of the Network’s largest educational products are NanoDays and the Nano Exhibition. 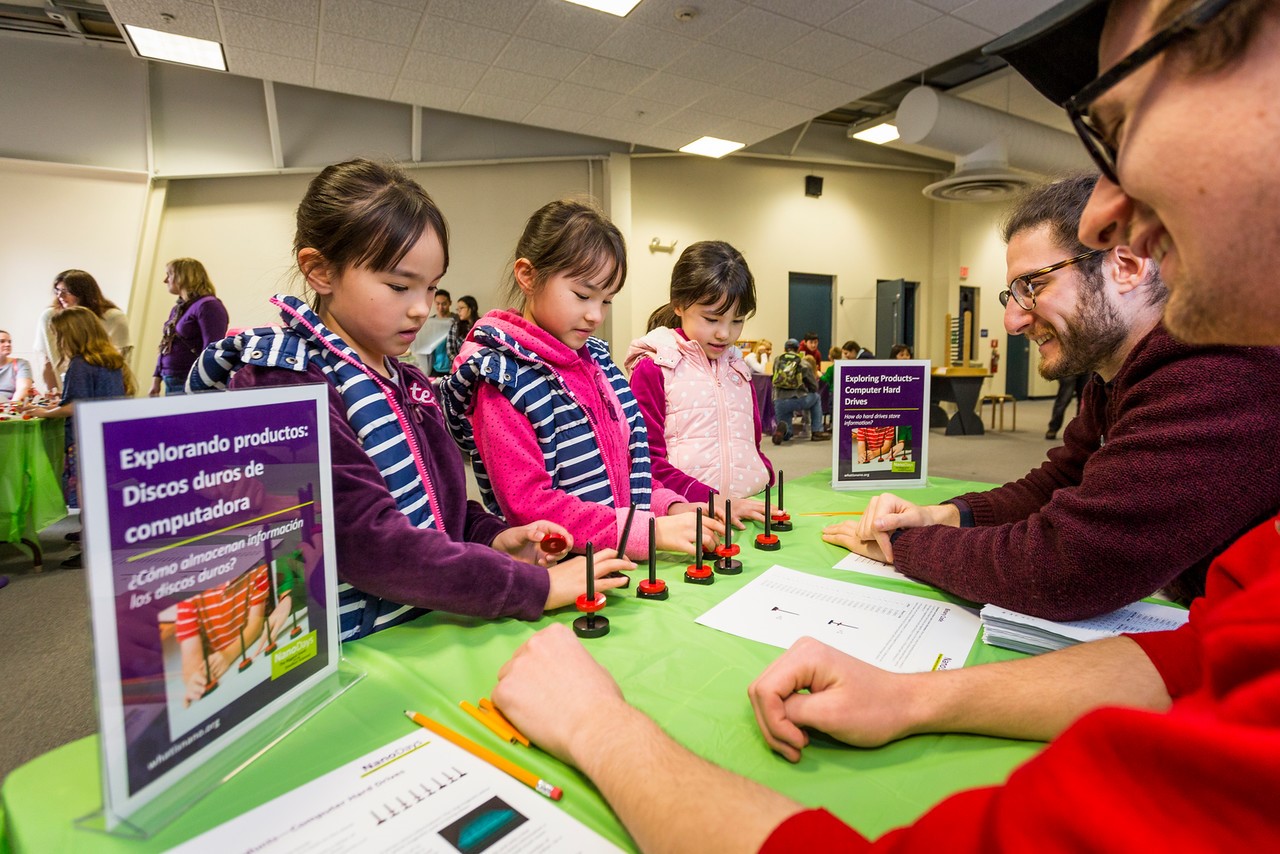 NanoDays is an annual nationwide festival designed to engage the public with nano through hands-on activities and programming and overtime has become the established signature event for NISE Net. NanoDays events began being implemented across the country in 2008, continuing every year through the Spring of 2015, and we hope will continue for years to come. Initially 100 physical kits were being distributed each year but by 2014 there were 250 physical NanoDays kits being distributed to Network partners.

But have you ever wondered just how big of an impact NanoDays has had on the public? Or, how your organization’s use of kit materials throughout the year might compare to other partners? Ultimately, wondering what is the total public reach for NanoDays, and for the Network?

Did you imagine that the impact and reach of NanoDays was that great? 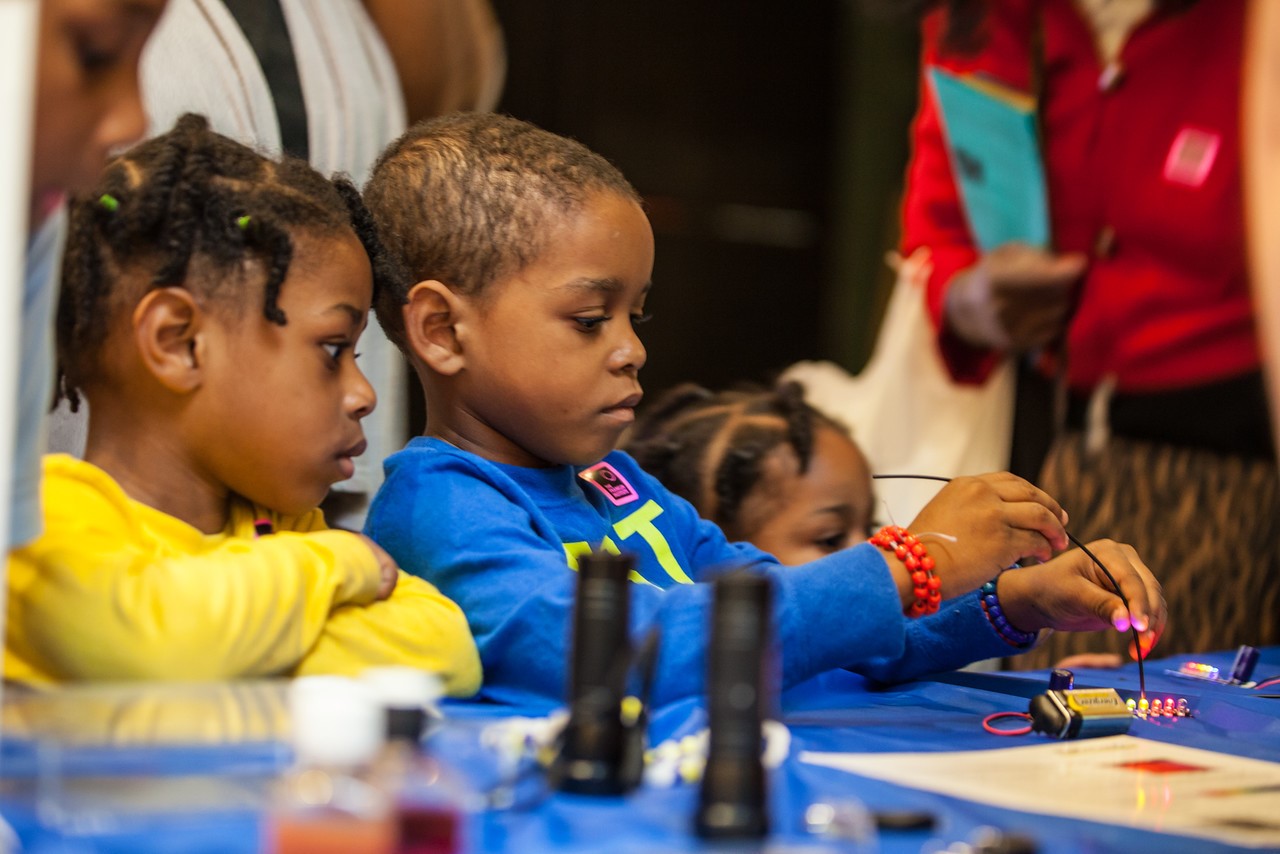 Estimating the public reach of the NISE Network has been an ongoing process throughout the project, which has involved multiple counting studies and other data-based projects. The estimation of public reach of NanoDays events relied on two data collection instruments: the counting protocol and the NanoDays report. Details on how these methods were used to calculate public reach estimates for annual NanoDays events and for use of NanoDays kit materials throughout the year are further explained in the summative evaluation report.

NanoDays events are estimated to have reached almost 1.2 million people from 2008-2015. But wait, there’s more! Additional programming by partners that used NanoDays kit materials throughout the year (response options provided in NanoDays report include cart demonstrations/table top activities, K-12 school outreach activities, special events, camps, outreach activities with community partners, professional development, longer museum programs, longer term display of materials in public spaces, and lesson activities within college courses) is estimated to have reached almost six million people from 2008-2015. An even greater accomplishment by partners is that beginning in 2011 and continuing every year afterwards, 100% of partners who completed NanoDays reports indicate the use of kit materials beyond the window of NanoDays events. By combining the reach estimates for NanoDays events and kit use throughout the year, the total number of people reached through NISE Net’s NanoDays effort will have reached over 7.1 million people between 2008 and 2015. The following table presents a breakdown by year of estimated public reach for NanoDays events and for kit use throughout the year.

The reach of the NISE Net was only made possible through the commitment and active participation of over 500 Network partners throughout the country, making nano accessible to a wide range of communities across the U.S. including smaller communities that may not have reach access to learning opportunities focused on current scientific research.

Did you know that there have also been counting studies done on the Nano Exhibition, which currently has 93 copies in circulation across the country? When we combine the estimates for NanoDays and the Nano Exhibition, it is projected that the NISE Network currently reaches over 10 million people a year through these educational products!

With the inclusion of estimated reach for NanoDays kits and the Nano Exhibition, it is estimated that the NISE Network will have reached over 30 million people by 2015. 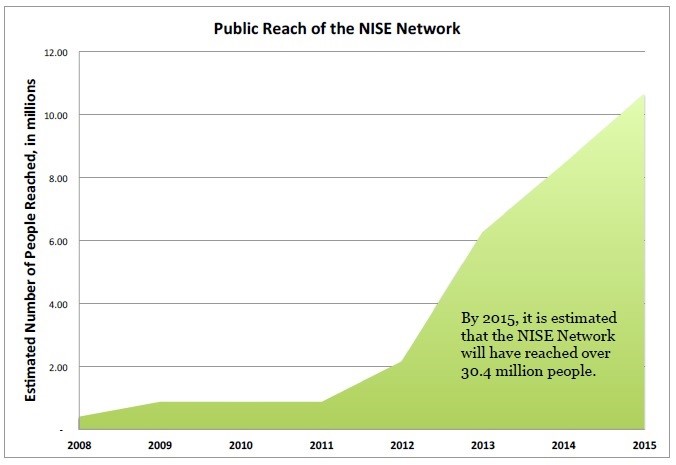 For questions about this report or for other Network evaluation-related questions, please contact Elizabeth Kollmann (ekollmann@mos.org), Senior Project Manager of Research and Evaluation for the NISE Network.