July 20th is the 50th Anniversary of the Moon Landing! Network Partners Join in the Celebrations

Fifty years ago, astronauts of Apollo 11 mission stepped foot on the lunar surface capturing the imagination of the nation, and the world. Now it’s time for a new generation to experience the magic of that first “one small step for [man], one giant leap for [man]kind.”

Many NISE Network partners have been preparing for the upcoming 50th anniversary by planning and hosting Moon landing celebration events. We’ve pulled together just a snapshot of partner events taking place all across the country.

The NISE Network has compiled the following resources to help plan your event: http://www.nisenet.org/moon50.

Moon Day was created in 2009 by the Frontiers of Flight Museum and the National Space Society of North Texas as an annual event to celebrate space exploration on or near the anniversary of the first Moon landing. The festival is a science, technology, engineering and math (STEM) focused space-themed public event, which continues to attract participants across North Texas and beyond. The Museum’s 10th Anniversary Moon Day celebration on July 20th from 10am-4pm will also commemorate the 50th anniversary of the Apollo 11 lunar landing.

As part of the special festivities, the Frontiers of Flight Museum will join the Smithsonian Channel’s Apollo 11 celebration with a screening of “The Day We Walked on the Moon.”  The Frontiers of Flight Museum, along with 50 Smithsonian Institution-affiliated museums across the country, will be among the first to screen this new documentary on the actual 50th anniversary of the Apollo 11 mission. 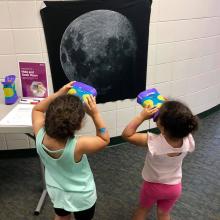 Scientists often use different tools to learn about Earth and space. Today we had fun doing the same while celebrating the end of year with our Community Action friends! #ExploreScience

The Bell Museum’s Year of Apollo celebrates the moon landing by hosting a year of special events, guests, and educational activities culminating on July 20th with a fun-filled daylong Apollo Anniversary celebration and Cosmic 5K Fundraiser. Activities throughout the year have included showcasing the seven meter spherical Museum of the Moon installation, special ‘Moon’ events such as story time readings and Moon tours, After Hours events, Moon yoga, a Super Moon Pajama Party, and planetarium shows.

This year marks the 50th anniversary of the first human steps on the Moon. Humans are explorers; throughout history, people have been driven to strike out into the unknown. The people who settled Hawaiʻi were no different. The legacy of Hawaiʻi is one of voyaging and exploration. Celebrate this historical event and the wonders of the Moon through Planetarium shows, Science on a Sphere programs, keiki activities, and learn the traditional Hawaiian nights of the moon. 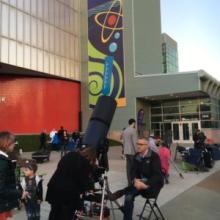 The Michigan Science Center is celebrating the 50th anniversary of the Apollo 11 Moon landing with a full day of space activities! From planetarium shows and solar viewing to special guest speakers and a crater drop, this is a party you won’t want to miss. Build your own ‘Egg-pollo 11’ lander to safely drop an egg to the ground and hop around in the moon bounce! Dress up in your best space-themed costume for reduced admission.

Events having been taking place at these various organizations throughout the year ranging from presentations by NASA astronauts, model rocket workshops, Moon-related hands-on activities, a NC Space Grant SPACE symposium for college and university students, higher education faculty and aerospace professionals, adult space camp, statewide star party, film screenings, A Space Spectacular! Symphony, and a culminating event, Countdown to Launch hosted by the Museum of Science. During this event, visitors can take part in hands-on aerospace activities, meet local space enthusiasts and NASA/JPL ambassadors, explore the universe in our StarLab dome, and much more!

The Museum will partner with the Lafayette Public Library to present a special Story Time (“Spaced” themed books) under the planetarium dome and in a Museum classroom. Additional activities will include storytelling, music, fingerplays and other educational activities.

The Denver Museum of Nature & Science is hosting upcoming Moon-related public events, including an educational talk, Moon Rush: The New Space Race, where a veteran space journalist will explore our enduring fascination with the moon, including how the United States, its allies and competitors, and key private corporations plan to return to, inhabit, and even harvest the moon in the decades to come. 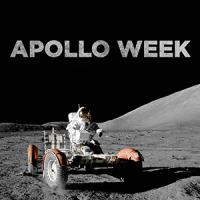 McWane Science Center is celebrating the 50th anniversary of the Apollo 11 lunar landing and the first-time humans visited another world on July 20, 1969. Countdown this momentous historical even with a host of far-out activities including daily bottle rocket launches during Apollo Week.

Join the worldwide celebration of the 50th anniversary of the Apollo 11 with Pensacola MESS Hall with Perfect Plain Brewing Co. Launch your inner astronaut as you explore outer space with themed cocktails, activities, and more.

Apollo 11 Anniversary Launch Party and Movie in the Park Event

Blast off with the Museum of Natural History and Planetarium and the Roger Williams Park Conservancy to celebrate the 50th anniversary of the launch of the Saturn V rocket that carried the Apollo 11 astronauts on their historic trip to the moon. Celebration begins with building and launching stomp rockets. At sunset (8:20pm) the new Apollo 11 movie begins. Crafted from a newly discovered trove of footage and uncatalogued audio recordings, the film immerses viewers in the perspectives of the astronauts, the team in Mission Control, and the millions of spectators on the ground. It launches us to those momentous days and hours in 1969 when humankind took a giant leap into the future. A FREE family event that all will enjoy! 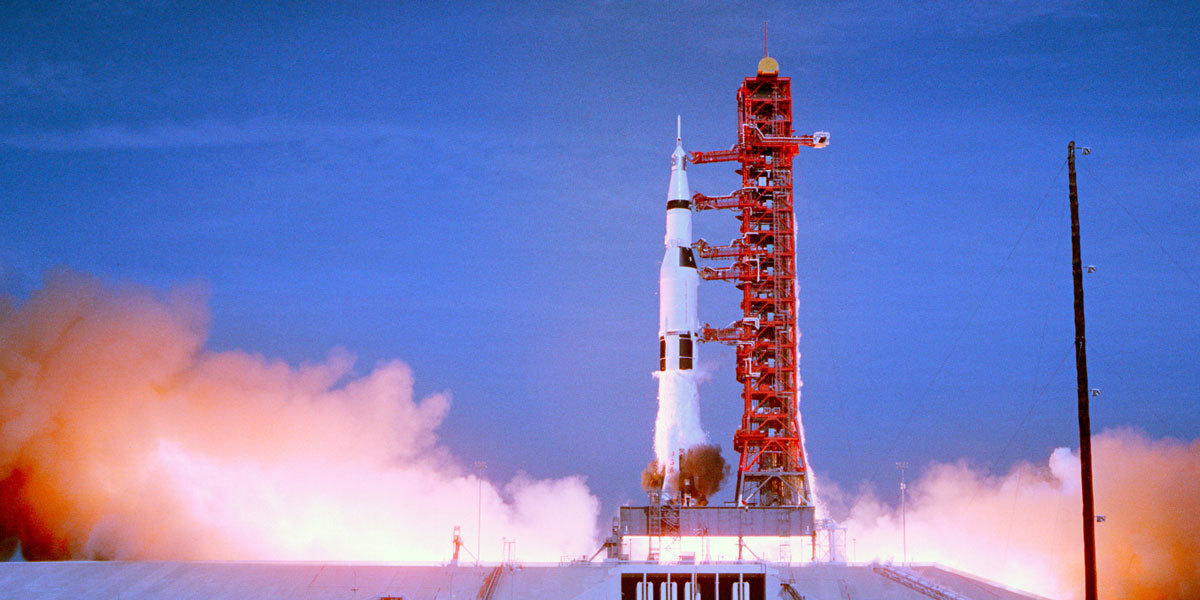 To recognize the 50th anniversary of the Apollo 11 landing on the Moon, the Gaithersburg Community Museum will be participating in the Global Rocket Launch. Stop by the museum to build and launch straw rockets in an attempt to land on the moon. Then join the museum at the Latitude Observatory on July 20 for the anniversary of the lunar landing and walk that will include hands-on activities, telescope viewing, and more evening festivities.

Enjoy an evening of stars, rockets, and Apollo 11 celebration at Discovery Museum’s Launch Party! Commemorate the 50th anniversary of the Apollo 11 moon landing while enjoying small bites and cocktails. Play a round of space-themed mini golf in the Museum, and participate in the Great Rocket Challenge. Moon viewing and stargazing will complete your night.

Forth Worth Museum of Science and Industry, Forth Worth, Texas 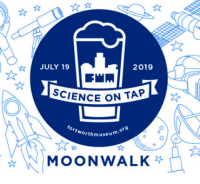 In celebration of the 50th anniversary of the Apollo 11 Moon Landing, Science on Tap: Moonwalk takes you to the stars! Grab a cosmic cocktail while you explore the past, present and future of space travel with hands-on activities and expert chats during Science on Tap: Moonwalk. See all the Summer of Apollo events at Fort Worth Museum of Science and Industry.

Experience all that the Science Center of Iowa has to offer — minus the kids. Find some friends, grab a drink and enjoy live music from local artists and adult-themed presentations and programming! This month's Mixology Night theme is "Moon Landing."

Join us for a day of programs in celebration of the 50th Anniversary of the Moon Landing! From rocket demonstrations to gravity experiments, explore the science of space exploration. Discover how different materials would react in space, construct your own mini rockets, learn about orbiting objects, build a shock-absorbing spacecraft, and even discover first-hand how craters are created on the Moon!

The Virginia Living Museum will be celebrating the 50th anniversary of the Apollo 11 Moon landing with a day filled with space science and excitement!  Planned activities include: Planetarium programs throughout the day, including Astronaut and A Giant Leap: Exploration Beyond the Moon Presentation of our Mercury space suit A variety of fun photo opportunities for the family, including Astronaut dress-up, "lunar" footprints, and more! Special presentation debunking a common "Moon Landing Hoax" misconception Live animal programs featuring critters that have gone to space! Grab a "Lunar Lunch" special in the Wild Side Cafe! Try your hand at training like an astronaut Celebrate Apollo 11 with a water rocket launch! Make your own rocket to take home! Moon-themed story times for the little ones and much more fun throughout the museum!

It’s one small step for the whole family to visit The Reading Public Museum and Neag Planetarium on July 20th, 2019 in celebration of the 50th anniversary of the Lunar Landing and historic moon walk by Neil Armstrong!  Spend the day participating in special crafts and activities in the Neag Planetarium, get creative as you make lunar themed art projects in The Museum, view the historic footage of the lunar landing, and much more!  Children ages 2 and over will receive a special goodie bag from NASA (while supplies last). For more information please visit www.readingpublicmuseum.org.

The NISE Network has compiled the following resources to help plan your event: http://www.nisenet.org/moon50. Topics and resources include:

Make sure your event is on the NASA public event map: https://spacestem.nasa.gov/events

Submit your event at either of these two locations:

If you would like to share your 2019 Apollo-related celebrations and events with the NISE Network community through an upcoming Partner Highlight, please contact Kayla Berry at [email protected] for more information.