Trois, deux, un…blast off! Visitors from as close as next door and as far away as Paris, France gathered around the upper plaza of the EcoTarium in Worcester, Massachusetts to celebrate 50 years since Apollo 11 headed into space. Though the rocket set to launch at the museum was 200 times smaller than the original Saturn V, the energy at the launch pad was just as high (we have to assume). Onlookers watched the life-like Estes model shoot up with a satisfying woooosssh and fly almost 200 feet in the air before the parachute deployed and it landed on the roof of a nearby out building. Special thanks to the EcoTarium’s maintenance crew for its resourceful retrieval of the spacecraft.

Along with cheering on two chemical rocket launches, attendees of the Lunar Launch Party also sent stomp rockets flying, and blew the tops off film canister rockets using a mix of acids and bases. Some drove model rovers through an obstacle course, designed and tested small-scale parachutes meant to safely return astronauts to Earth, and watched Red, White and Blue Moon, a live show in the planetarium. 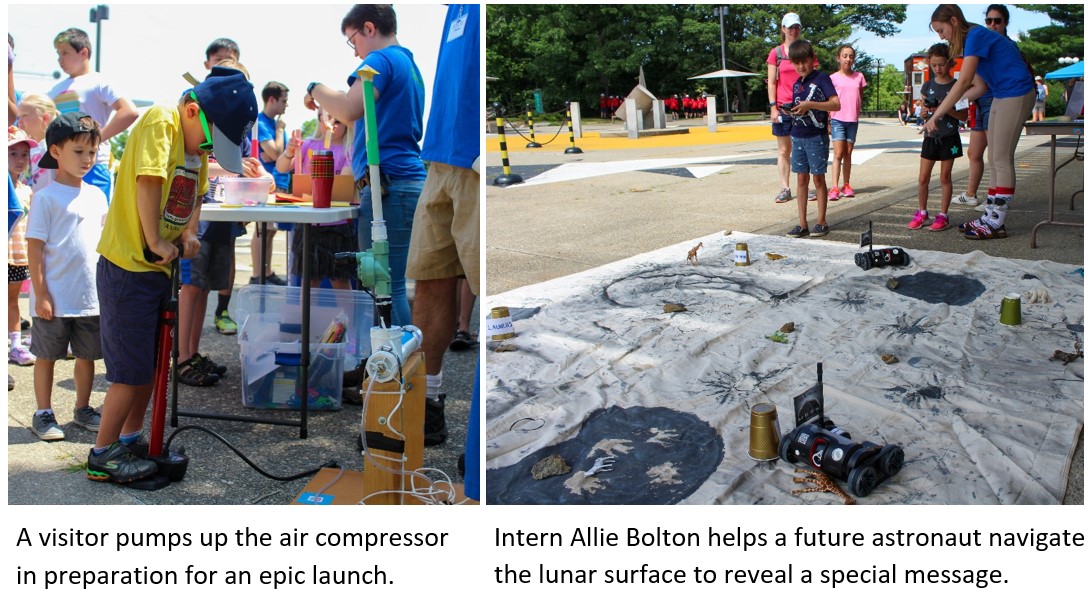 Perhaps the most inspiring element of the day was a video message recorded for the EcoTarium by astronaut Cady Coleman, a New Englander, herself, who’s spent a total of six months on the Space Shuttle and on International Space Station missions. Astronaut Coleman asked the audience to take a broad view of spaceflight:

“When you look back at the Apollo missions, you’ll see not only the astronauts you recognize, but hundreds of other people—engineers, doctors, writers, artists—the whole team who made it possible…I urge you to realize you could be one of those people. The newest generation of explorers is you.”

Visitors from all walks of life took that message to heart, but it has special resonance for students in central Massachusetts, a region with deep ties to the aerospace industry and its pioneers. Worcester, MA is home to the father of modern rocketry, Dr. Robert H. Goddard, and his tireless clerk, scribe, advocate and wife, Esther. In fact, as part of the Worcester on the Moon celebration later that week, locals gathered for a celebration just south of the EcoTarium at the site of the first ever liquid-fueled rocket launch, which was carried out by Goddard in 1926. 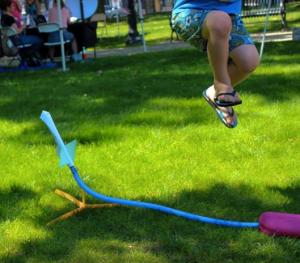 That experimental spirit manifested back at the museum in the time visitors spent straightening nose cones, determined to launch a few inches higher, or proudly displaying red safety goggle marks after concocting propulsive mixtures in the summer heat.

Fifty years ago, the world held its breath as three astronauts traveled as far from home as any humans ever have. Now as NASA plans to return not just to the moon, but to send humans to Mars, a new group of innovators will have to step up. We look back with gratitude and we look forward with hope, that the right people—maybe even one who stomped a rocket, or drove a rover, or built a clothespin parachute—will pilot the future of space travel.

To learn more about the EcoTarium's celebration of the 50th Anniversary of the Moon landing, contact Rachel Quimby, Public Programs Coordinator/Museum Educator, at rquimby@ecotarium.org.