Hannah Kang, Morrison Planetarium at the California Academy of Sciences

The Morrison Planetarium presenter team at the California Academy of Sciences was fortunate enough to receive the Earth & Space toolkits for 2017 and 2018. Planetarium presenters have featured these demonstrations on our museum floor multiple times, including at our weekly “cocktails and science” NightLife adult events; in a given night, presenters reach anywhere between 50 and 200 people. NISE Net hands-on demonstrations help us address some of the hottest topics in astronomy, from gravitational waves to the possibility of exoplanetary life.

And we have kicked things up a notch, combining the tactile experience of hands-on NISE Net demonstrations with digital astronomy visualizations. There are a wide array of digital tools available online to help put the physical concepts expressed in hands-on demonstrations into visual perspective. Here’s how we put our digital spin on some of these powerful NISE Net activities.

Imagining Life (Exploring the Universe) is an activity included in the 2017 Explore Science: Earth & Space toolkit. In this activity, guests peruse cards about extremophiles (organisms that survive in extreme conditions), expanding their definition of “habitable” environments. 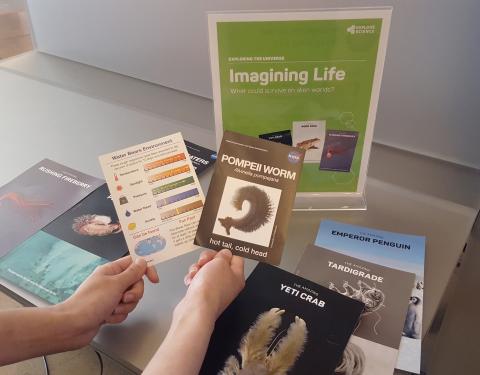 Above image: Illustrated Extremophile Cards Included in the Activity

For example, the Rushing Fireberry card describes a habitat awful for humans: “scorching hot, deep sea volcanoes.” Humans cannot survive in such an environment. Humans also cannot survive on most of the exoplanets that we have discovered, but perhaps an organism similar to a rushing fireberry could!

Our presenters love talking about exoplanets, but we also wanted to prompt our audiences’ imaginations with stunning visualizations of these worlds. We chose to display artist representations of various exoplanets (accurately embedded in a three-dimensional database of local stars) using our planetarium software (Uniview by Sciss) on monitors in order to whisk guests away to worlds like 55 Cancri E. 55 Cancri E is an exoplanet at searing-hot proximity to its parent star; fatal for humans, but potentially cozy for lifeforms similar to Rushing Fireberrys. This floor demonstration offered rich opportunities for visitor interaction, with some guests using an Xbox game controller to navigate between exoplanets for themselves. Some guest feedback noted that personally controlling the flight from Earth and Solar System to a (hypothetical) exoplanet helped give visual context to the verbal explanation of an “extrasolar planet beyond our solar system.” 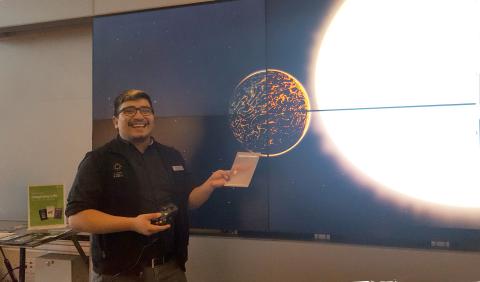 Guests and presenters responded favorably to these pairings of digital and hands-on activities, and we have continued to expand other NISE Net/NASA activities with digital astronomy software, including:

And a special program developed in collaboration with our Careers in Science intern Malik B., who delivered the program at the Academy’s 2018 Teen Science Night:

Although we used Uniview for early experiments, it was also important to us that our resources be freely accessible for educators and the public. For example, even without bespoke planetarium software such as Uniview, anyone can access free tools such as NASA’s Eyes on Exoplanets. This publicly available astronomy visualization platform (as well as the related Eyes on the Earth and Eyes on the Solar System) allows any PC or Mac user to explore the Universe for themselves. NASA’s Eyes therefore allows our expanded version of the NISE Net demonstrations to be reproduced in the classroom—or even at home. (We are currently developing a standardized facilitator’s guide for these demos centered around free, publicly available software!)

If you are interested in learning more and will be attending the annual meeting of the Astronomical Society of the Pacific this September, come on by to our 1-hour workshop. Titled “Combining Hands-On and Virtual for Active Visitor Engagement,” this session will introduce ideas for future digital asset development to complement hands-on activities.

For other comments or questions, please contact Hannah Kang at hkang@calacademy.org.