On a scale only previously seen at our gala fundraiser and the Thunder over Louisville extravaganza, Kentucky Science Center’s team joined forces on August 21, 2017 to deliver eclipse programming to three sites: two in totality and one at our flagship facility. An estimated 2,000+ patrons experienced an eclipse program with us, with perhaps as many as 100,000 media impressions, interactions, and background content recipients leading up to this big day. In a build-up familiar to almost every science center, museum, and library near the path of totality, we became inundated with requests for glasses, but in a moment of clarity near the end of the planning stages, we took comfort in this knowing that the public perceived us as an eclipse resource. 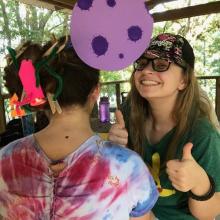 Through our long-standing partnership with Girl Scouts of Kentucky, we participated in a weekend-long overnight camp experience at Camp Bear Creek in Benton, KY August 19-21 that concluded with observing the first total solar eclipse visible in Kentucky since just after the Civil War. Programs included team-building astronaut challenges, radio construction, parachute launches, and a highlight of careers unique to space science from guest speakers.

The Logan County Public Library in Russellville, already the host site of Kentucky Science Center’s new travelling Science in Play 2 Go (SIP2Go) early childhood exhibit, was registered as an official NASA eclipse viewing destination. Education team members facilitated NISE Net’s Explore Science: Earth & Space toolkit activities in the library’s indoor “cooldown” room to an estimated crowd of 1,000 from many states and over a dozen countries. All activities, with the exception of the Ice Orbs, were facilitated for hours and the Orbiting Objects activity was especially well received. 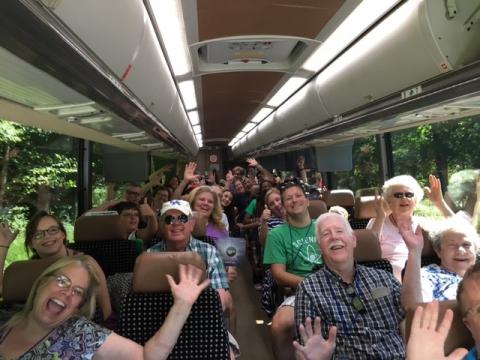 The Library was the perfect community partner to reserve total eclipse viewing space for patrons from Louisville. Three sold out luxury motor coaches pulled away from Kentucky Science Center at 8:00 am to travel to Russellville, KY and totality. Pleas for both clear skies and roads were heard, and 150 guests on the “Experts and the Eclipse VIP Experience” joined the crowd. Each motor coach featured content specialists including astronomers recruited through the Kentucky Academy of Science, a low gravity cardiologist, a representative from the National Challenger Center, and artists from Sweden. Instead of just a bus ride, patrons were treated to high-end content on both legs of the excursion, with additional presentations provided under tents in a “Science Salon.” The assembled crowd stirred with anticipation as the light changed with the approaching totality and then cheered as that distinct black disk and white coronal wisps were viewable without glasses. The group quickly grew silent to take in the rarity of the moment, and for a few seconds the sound of crickets could be heard throughout the area. 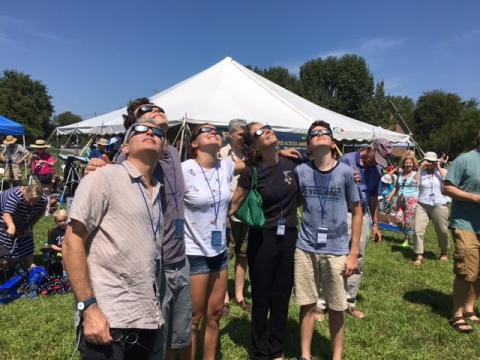 Event #3 At the Kentucky Science Center

While not in the path of totality, and during a notoriously quiet time in the exhibit spaces, Kentucky Science Center was activated for over a week as a destination for space science content for over 2,000 guests. For six days, our Discovery Gallery was changed into an Eclipse Viewing Prep Lab, with materials for guests to make Mylar screen viewers and pinhole projection box viewers. This also served to provide strong science content to visitors that called or approached us specifically for sold out eclipse glasses. Other “walk-up” activities included eclipse themed early childhood programming in the Science Depot and an atrium display with Educators operating an orrery and distributing NASA materials. Prior to this, a pub science event to address the science of eclipses was held back in June 2017.

External Affairs department team members, paired with a more drama-based member of the Education team, took the eclipse experience to two nearby Ohio River destinations to mingle with eclipse viewers and create engaging Facebook Live videos. Both eclipse seekers and passers-by in the park were engaged in an improv style. At the peak of the partial eclipse (over 95% coverage), over 140 participants gathered on Main Street to observe the phenomenon. 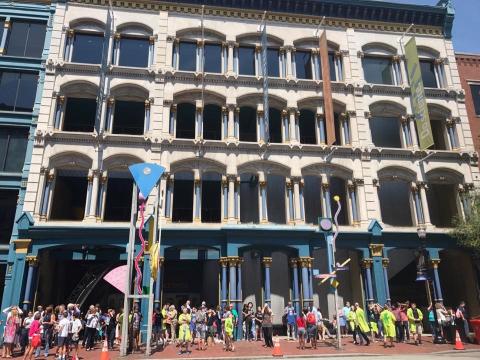