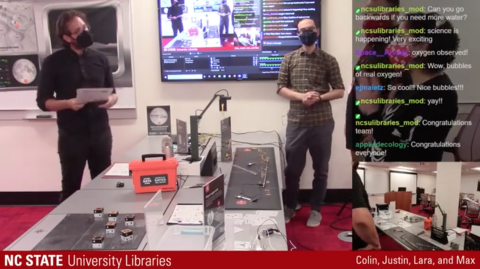 About a year since its release, and after months of play by elementary and middle schoolers on the Museum floor, the Moon Adventure Game underwent a new kind of test: a trial run featuring experienced escape room designers streamed live for the public on Twitch.

The librarians at North Carolina State University developed an escape room to help students learn how to use new tools and materials available to them in the library. When the COVID-19 pandemic hit, these librarians, still committed to experiential learning and games, took some of their work onto Twitch.

Which is how The Museum of Life and Science ended up bringing their well-loved copy of the Moon Adventure Game out for the ultimate test: a live stream of the adventure, facilitated by one of the game’s designers, and played by three experts in experiential learning, games, and escape rooms.

“I had a really great time playing the game and I think students who play it not only learn really interesting information about the Moon but have to put their critical thinking skills to the test! The format is definitely a bit different than an escape room but the mechanics are similar and it works just as well. I learned a lot from playing!” – Lara Fountaine, Community Engagement and Visitor Relations Librarian

The gameplay was followed by a lively discussion about game design, learning through games, pedagogy, and common visions for how games might be useful between informal learning spaces.

"I had a great time discussing games as pedagogy. Learning through activities and role play is really powerful and it was great to compare this game to our escape room." – Colin Nickels, Experiential Learning Services Librarian

Escape Rooms and Adventure Games, like the Moon Adventure Game, are fascinating and innovative new opportunities for learning, and to both emotional and intellectual connections to science content. As much as the game is about understanding lunar science and exploration, it is also about building 21st century skills, exercising critical thinking, and having fun with your friends.

You can watch the Twitch livestream in it’s entirety below