Build a Mars Habitat - Survive and Thrive is an exhibit component designed to inspire, engage, and educate the next generation of explorers about human exploration on Mars; 52 copies will be designed and fabricated as an addition to the 52 copies of the Sun, Earth, Universe exhibition located throughout the  United States.

This NASA TEAM II project (2020-2022) will create an exhibit called Build a Mars Habitat - Survive and Thrive as an addition to the Sun, Earth, Universe exhibition. The exhibit will be designed to inspire, engage, and educate the next generation of explorers about human exploration on Mars. The exhibit will utilize a familiar style of building blocks that will allow museum visitors, especially school field trips and families with children in grades 4–8, to immediately be able to design and construct their own imaginary habitat for successful living on Mars. Graphic prompts and instruction will lead to thoughtful reflection about the elements necessary for humans to establish an outpost on Mars and truly survive and thrive in the environment. Using an evidence-based approach, project evaluators will ensure that the exhibition is effective and enjoyable for visitors.

The project team will develop, prototype, fabricate, and distribute 52 identical copies of the Build a Mars Habitat - Survive and Thrive hands-on museum exhibit to supplement the 52 copies of the NASA-funded Sun, Earth, Universe exhibition recently distributed by the NISE Network to science and children’s museums across the United States. The Sun, Earth, Universe exhibition is being shared with over 100 host museums and the additional exhibit would engage visitors in imagining future human exploration of Mars.

The existing Sun, Earth, Universe exhibition is an engaging and interactive museum exhibition about Earth and space science for family audiences. The exhibition is intended for long-term display in museums across the United States, where it will engage millions of people per year. Fifty-two (52) identical copies of the exhibition have been fabricated and distributed in 2018–2019 to eligible NISE Network partners through a competitive application process. The exhibition serves as a platform for scientists and museum staff and volunteers to engage visitors with additional facilitated educational programming and hands-on experiences. The exhibition includes content on heliophysics, astrophysics, planetary science, and Earth science. The exhibition does not contain any information about human exploration. The  Build a Mars Habitat - Survive and Thrive exhibit would add this important complementary content on human exploration.

The project fits within NASA’s strategic goals, is aligned with the TEAM II NASA Research Announcement (NRA) theme of “Moon to Mars,” and would result in meaningful target audience engagement focused on the essential needs for human exploration and survival on Mars. The project would leverage a national network and local partnerships to reach sizeable public audiences nationwide, including groups that are underserved and underrepresented in STEM. Leveraging the infrastructure of the NISE Network, the exhibit project will introduce millions of museum visitors in the target audience across the nation. The project will further CoSTEM goals, engage youth in authentic STEM learning, and foster 21st Century Skills of creativity, problem-solving, collaboration, and communication. 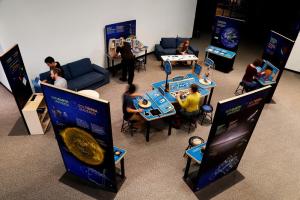 This material is based upon work supported by NASA under Grant Number 80NSSC20M0030. Any opinions, findings, and conclusions or recommendations expressed in this material are those of the author(s) and do not necessarily reflect the view of the National Aeronautics and Space Administration (NASA).