Welcome to the monthly e-newsletter for the National Informal STEM Education (NISE) Network and community.

The National Informal STEM Education Network (NISE Net) is pleased to offer 250 free Explore Science: Earth & Space 2018 toolkits to new and existing eligible partners in the U.S. In collaboration with NASA, the NISE Network has assembled a new set of engaging hands-on activities around Earth and space with connections to science, technology, and society.

Explore Science: Earth & Space 2018 toolkit applications must be completed and submitted online by November 1, 2017. Learn more about how to apply

The Building with Biology project began in the fall of 2014, and through collaborative partnerships with scientists a kit of Building with Biology hands-on activities and public dialogue programs were created and disseminated to nearly 200 sites across the U.S. to help recipients incorporate public engagement with science (PES) activities about synthetic biology into their educational programming. While the initial project introduced new content (synbio) and practices (PES) into a variety of organizations, and with the current news around the gene editing technique CRISPR, the time is right to address this topic through the development of a brand new forum program on human genome editing.

Through a competitive application process, 20 sites will be selected to receive physical forum materials on human genome editing and a small stipend to help support the implementation of a forum in the summer of 2018. In the coming months, we will announce the eligibility requirements and application process - stay tuned. Continue reading about the project's new forum and evaluation findings from Summer 2016 Building with Biology events and forums.

The great American solar eclipse of 2017

All across the country people of all ages gathered to witness the August 21st solar eclipse and made memories to last a lifetime. What an amazing event for us to celebrate both on and off the path of totality!

Online Workshops: Staying connected to the Network and Community

The NISE Network runs a series of free online workshops to increase the number of professional development opportunities available to our partners, and to create more channels for partners to share their work and learn from each other directly. View full details for upcoming online workshops at http://www.nisenet.org/events.

Learn More About the 2018 Explore Science: Earth & Space Toolkit
Tuesday, September 12, 2017; 2:00 - 3:00 PM Eastern - Sign up now
In this online workshop, NISE Net partners will present a general introduction to the Space and Earth Informal Science Education (SEISE) project, and an overview of what’s in the new 2018 Explore Science: Earth & Space toolkits, including information about how to apply for a toolkit and eligibility requirements. Toolkits are open for both new and existing NISE Network partners located in the United States; the application is now open!

Museum and Community Partnerships - Part 1: Libraries
Tuesday, October 10, 2017; 2:00 - 3:00 PM Eastern - Sign up now
Libraries are wonderful venues for reaching new, underserved audiences, since they are free and open to everyone. Join us to hear about successful partnerships between science museums and their local libraries, and how you can build a connection with the library in your own community. We'll also highlight activities from the Explore Science: Earth & Space toolkits that are ideal for library programs.

Museum and Community Partnerships - Part 2: Girl Scouts
Tuesday, November 14, 2017; 2:00 - 3:00 PM Eastern - Sign up now
The Girl Scouts announced a new set of STEM badges in 2017! Join us to learn about the new badges, and how science museums can successfully partner with their local Girl Scout troops. We'll be joined by STEM Strategy staff from Girls Scouts USA, as well as staff from museums who have built successful partnerships with their local troops. We'll also highlight activities from your Explore Science: Earth & Space toolkits that are ideal for Girl Scouts programs.

The NISE Network will be hosting an exhibit booth that will feature public engagement activities from a variety of NISE Net projects, as well as providing information about upcoming project opportunities around chemistry, Earth and space, and synthetic biology. The Network invites partners to join us for the following activities (read more about these opportunities here): 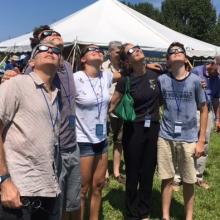 L.C. Bates Museum Celebrates the Solar Eclipse on the Ground and in the Sky 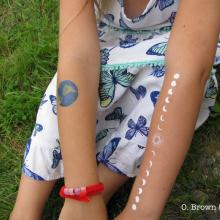 Since early 2017, with the help of the NISE Net's Explore Science: Earth & Space toolkit, the museum introduced solar eclipse science to thousands of people and distributed over 3,000 pairs of solar eclipse glasses. With clear skies, over 500 people gathered on the museum's lawn to view the eclipse through glasses and filtered telescopes, and engaged in hands-on activities. Additionally, the museum's Earth to Sky Calculus Maine Hub sent a team of citizen scientists to Wyoming to send up a high altitude balloon to collect data and capture photos of the solar eclipse. Read full partner highlight about L.C. Bates Museum

SCIENCE IN THE NEWS

The farthest operating spacecraft, Voyagers 1 and 2, still exploring space 40 years later
Launched in 1977, and within a short window that took advantage of a unique alignment of the four giant outer planets that wouldn't happen again for another 176 years, the Voyager spacecrafts have explored the farthest reaches of our solar system helping to shape our understanding of the outer planets. Now more than 10 billion miles from Earth, the Voyagers continue to explore interstellar space and return data to NASA daily. Read more about the 40th annivarsary of the world's farthest and longest-lived spacecraft

Cassini's 'grand finale' plunge into Saturn's upper atmosphere on September 15, 2017
NASA's Cassini spacecraft arrived at Saturn in 2004 and has since been providing scientists with rich and valuable data and images about Saturn and its moons. Throughout the 13 years Cassini has been collecting data, scientists have learned of great discoveries on its moons including methane rivers flowing into methane seas, observing jets blasting materials into space, and have identified liquid water that may have the potential to harbor the ingredients for life. Cassini's final dives between Saturn and its rings will help yield even more information, and before the spacecraft runs out of fuel it will make one final dive into the upper atmosphere of Saturn transmitting its final message to NASA before burning up. Read more about Cassini's 20 year journey and its epic ending

NASA's eClips has new, free resources for your classroom

First human embryos edited in the U.S.
A first of its kind in the U.S., scientists have altered the DNA of one-cell embryos using the gene-editing technique CRISPR. Embryos were not allowed to develop for more than a few days, however, these experiments show how changing the DNA code of human embryos may allow scientists to one day correct genes that cause inherited disease through a process called "germline engineering," meaning the genetic changes would be passed on to subsequent generations. Such scientific advancement is also met with concern and criticism by some who believe this type of genetic engineering could lead to "designer babies." Read more about U.S. research to genetically modify a human embryo

First genetically engineered salmon sold in Canada
After a 25 year wait, the U.S. firm AquaBounty Technologies' transgenic salmon is now for sale in Canada marking the first time a genetically engineered (GE) animal has been sold for food on the open market. This fish has been engineered to grow faster in roughly half the amount of time than it takes its non-engineered counterpart. Seen as a way to grow healthier salmon through a more sustainable process while creating more salmon-fishing jobs for the US and Canada, the battle in the market place continues over the labeling of genetically engineered food for sale. Neither country requires the salmon to be labeled as GE for sale. Currently, the sale of this fish in the US market is stalled. Read more about the first GE salmon sold in Canada

Viruslike nanoparticles kill drug-resistant bacteria
The rise of antibiotic-resistant superbugs has become a serious health concern with bacteria learning to outsmart conventional antibiotics. Although in early research stages, scientists have been trying to develop antimicrobials that physically rip harmful bacteria apart, and are less disruptive to bacteria in the human microbiome. Read more about how nanotechnology is playing a role in medicine

American Chemical Society's Reactions Video: Why do superhydrophobic materials never get wet? In this episode, learn how chemistry is used to keep things dry.

STEM THROUGHOUT THE YEAR