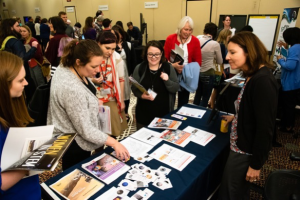 Dive into craters to explore ancient ice on the Moon! Experience glowing blue sunsets on Mars! Observe the
Sun’s dynamic activity! Fly to the edge of the observable Universe! Take your audiences on these and other cosmic explorations with OpenSpace, a freely available open- source data visualization tool designed for presenting astronomical, planetary, and space science data from NASA and other sources in a range of settings including exhibitions, immersive theaters, and planetarium domes. Funded as part of NASA’s Science Mission Directorate’s Science Activation Collective and led by the Science Visualization Group at the American Museum of Natural History in New York City, a growing number of informal science institutions are using OpenSpace to present complex data with clear, compelling, dynamic, and engaging visualizations. Current ISI partners include California Academy of Sciences, Denver Museum of Nature and Science, North Carolina Museum of Natural Sciences, Houston Museum of Nature and Science, The Adler Planetarium, and The Exploratorium.

This software is updated frequently with new data sets and can be used to provide live interactive programs about NASA’s exploration of the Solar System, including current missions to Mars and Pluto and historical missions such as Apollo and Voyager. A brief guide will be available with information about downloading and installing the software, basic navigation, tips and tricks, and exciting program ideas that leverage the unique visualization capabilities of OpenSpace.

An open-education digital resource for educators of all types, providing a space to connect, create, and collaborate around digital learning experiences and compelling NASA visualizations.

The mission of the Astronomical Society of the Pacific (ASP) is to increase the understanding and appreciation of astronomy to advance science literacy. Resources include books, training for formal and informal educators, and hands-on activities for a variety of audiences, from pre-K children to adults.

Administered by the ASP, NASA’s Night Sky Network is dedicated to supporting informal astronomy enthusiasts in astronomy clubs across the US. Find out how to partner with these local experts to bring the awe of the night sky to your museum.

NESEC is creating engaging, meaningful, and authentic STEM experiences and resources for educators and learners based on NASA Earth science that are delivered broadly through strategic collaborators and networks like NISE. NESEC is funded by NASA’s Science Mission Directorate and is a partnership among four organizations: The Institute for Global Environmental Strategies (IGES) and the Earth Sciences at three NASA Centers: Goddard Space Flight Center, Langley Research Center, and Jet Propulsion Laboratory.

NASA’s Solar System Treks Project (SSTP) produces web-based interactive visualization and analysis tools that enable mission planners, planetary scientists, students, and the public to explore the surfaces of a growing number of planetary bodies as seen through the eyes of many different instruments aboard a variety of spacecraft. Views can be stacked and blended. Users can interactively fly over peaks and down into valleys in 3D mode; measure distances, heights, and depths of landforms; mark areas for output to 3D printers; and create paths for immersive viewing experience using VR goggles. While originally initiated for mission planning and science, this technology has demonstrated great benefits for STEM engagement and inspiration. As a component of NASA’s STEM Activation Infrastructure, they are available as resources for NASA STEM Activation partners, and to the greater outreach and education community. As new missions are being planned to a variety of planetary bodies (including the first human missions to Mars), these tools are facilitating the public’s understanding of the missions and engaging the public in the process of identifying and selecting where these missions will land.

Within NSSEC is a STEM Innovation Lab, which is a think tank for NASA scientists, engineers, and educators to explore and develop new ideas that will infuse educational technology into STEM (Science, Technology, Engineering, and Mathematics) activities, programs, and approaches. It also provides museums a platform to share their ideas, research, and results.

Inside the lab is a variety of interchangeable exploration stations fitted with technologies typically found in many of today’s 21st-century educational environments. By placing these stations in close proximity to each other, we encourage users to investigate how the technologies can be effectively blended together for greater impact and integration into NASA education programs and products. In this gathering we will showcase VR, 2D/3D printing, Eclipse Soundscape, and volumetric data display.

NASA’s Museum Alliance is a free, active community of practice that provides informal educators access to NASA and its resources via:

The Alliance provides a platform for sharing your events and exhibits with NASA and its audiences, and advocates for informal education within NASA by providing a central nexus for feedback, requests, and communication between NASA content developers and informal educators.

The Solar System Ambassadors (SSA) program is a nationwide volunteer public engagement effort sponsored by NASA’s Science Mission Directorate and managed by NASA’s Jet Propulsion Laboratory. SSAs are space enthusiasts from all walks of life who are asked to conduct and report four events annually where they share NASA’s story in ways meaningful to their communities.

Ambassadors are chosen based on their exceptional communication skills and community connections. SSA training involves connecting Ambassadors with NASA scientists and engineers via webinars and telecons, providing them with the most up-to-date information and materials possible to share at their events. Ambassadors are encouraged to collaborate with members of other NASA-supported projects, including the Museum Alliance, Night Sky Network, NASA@ My Library, and the NISE Network.

Currently, there are 1,000 SSA volunteers in all 50 states, US territories, and US military bases and consulates overseas. Over the past 22 years, Solar System Ambassadors have reached almost 9.7 million people directly and more than 484 million people indirectly.

NASA’s Eyes is a publicly available visualization system created by NASA JPL. Eyes allows users to virtually ride along with NASA missions, view and zoom in to realistic simulations of planets, moons, stars, and space objects studied by NASA scientists. The system is a downloadable program with daily self- updating content from NASA featuring three museum-friendly versions: Eyes on Earth, Eyes on the Solar System, and Eyes on Exoplanets. In addition, the Eyes team is now creating web browser–based simulations that work on your mobile phone.

Planetary Learning that Advances the Nexus of Engineering, Technology, and Science (PLANETS) is an interdisciplinary and cross-institutional partnership to develop and disseminate out-of-school-time (OST) curricular and professional development (PD) modules that integrate planetary science,

technology, and engineering. Partners include the Center for Science Teaching and Learning at Northern Arizona University, the U.S. Geological Survey Astrogeology Science Center, and the Museum of Science, Boston.

The NASA Airborne Astronomy Ambassadors (AAA) program is designed to measurably enhance student STEM achievement and engagement in selected school districts via professional development for high school science teachers. AAA participant professional development consists of training in astrophysics and planetary science content in webinar and face-to-face workshop formats, a curriculum unite, as well as a weeklong STEM immersion experience at NASA’s science research aircraft facility in Palmdale, California. The SETI Institute will be recruiting school district partners for the next cycle this spring. Teachers from partner school districts with a signed MOU will submit applications this fall. Program description and timeline will be available for review.

NASA@ My Library works with public and state libraries across the country to bring NASA science and exploration to patrons at these venues and their partner sites. NASA@ My Library includes a kit program, professional development and training opportunities, support for Community Dialogues, and a robust evaluation program. The project team will be showcasing items from their successful kit program and free Android apps. Learn about conducting Community Dialogues to work with your community on your programs. Get ideas for partnering with libraries in your community, especially during the 2019 summer celebration of space science and the 50th anniversary of the Apollo moon landing occurring at libraries across the nation.

NASA’s Universe of Learning creates and provides resources and experiences that enable youth, families, and lifelong learners to explore fundamental questions in science, experience how science is done, and discover the universe for themselves. Made of organizations embedded within NASA missions and that produce some of the most iconic science and imagery in the world, NASA’s Universe of Learning uses its direct connection to the wonders of the cosmos and the experts behind the science to enable learning for people of all ages. NASA’s Universe of Learning products and programs provide opportunities to explore current NASA Astrophysics themes in multiple ways, including authentic experiences using data and multimedia.

Come experience a 360 degree fly-through of the Orion Nebula, explore the colors of visible and invisible light through ViewSpace, and search the heavens with robotic telescopes that you direct with our MicroObservatory. These and other interactive and immersive experiences allow for learners to make a personal connection to our universe.

The Lunar and Planetary Institute has a variety of Earth and Space Science resources for museums and other out-of- school-time venues, including small traveling exhibits, Explore hands-on activities, the Lunar and PlanetARy App, the latest planetary science news, and more.

Northwest Earth and Space Sciences Pipeline (NESSP) is a collaborative NASA-funded STEM education program serving students, teachers, and their diverse communities throughout the Pacific Northwest. Our focus is to reach communities that are under-served and under-represented in STEM. This year we are holding a celebration of the 50th Anniversary of the Apollo 11 Moon landing through a drone and robot challenge called the Apollo Next Giant Leap Student Challenge (ANGLeS Challenge). Thirteen hubs around the nation have agreed to hold Regional Hub Challenges using NESSP's model, and teams that win at these challenges will earn the grand prize of a trip to Johnson Space Center in Houston, Texas! Full information, registration, and the Challenge manual will all be available at www.nwessp.org/apollo50 on February 1, 2019.

The Gulf of Maine Research Institute pioneers collaborative solutions to global ocean challenges. Located in Portland, Maine, GMRI is dedicated to the resilience of the Gulf of Maine ecosystem and the communities that depend on it. In service of this mission, we provide free, immersive, and authentic science education experiences for learners of all ages across Maine and beyond.

Through a five-year, NASA-funded project, we and our collaborating partners are developing interactive ways in
which learners can explore the local impacts of climate change through the lens of both global and local data. An essential aspiration of the project is to understand and create a model for how data-centric experiences developed in and for one place can be made applicable anywhere. Our goal is for learners in many locations to engage with a rich array of science and mathematics as they consider the connections between local science and global-scale processes, the evidence of a changing climate, and the ways human activity and climate intersect with natural systems.

What local climate story do you wish you could tell? What data sets do you need to tell it? We want to talk with and learn from science centers interested in developing highly localized, data- rich engagements around climate change to better understand the challenges and opportunities involved.

The NASA Scientific Visualization Studio (SVS) works with NASA-affiliated programs and researchers to visualize their data for the purpose of communicating their goals and results in an exciting and accurate manner. All of the visual products created by the SVS and its partner groups are made available

through its website and are completely free for use by the public. Although not strictly created for STEM education, SVS visualizations dramatically illustrate scientific concepts and discoveries in a way that bridges the gap between scientific knowledge and the real-world application of that knowledge. The SVS is also open to modifying existing visualizations so as to better fit the needs of external users.

This material is based upon work supported by NASA under cooperative agreement award numbers NNX16AC67A and 80NSSC18M0061. Any opinions, findings, and conclusions or recommendations expressed in this material are those of the author(s) and do not necessarily reflect the view of the National Aeronautics and Space Administration (NASA).