The California Science Center in Los Angeles, CA has a mission to inspire science learning in everyone by creating fun, memorable experiences, even virtually! In preparation for the James Webb Space Telescope Launch, two education staff, Elaine and Evelyn, set out to do just that by creating a bilingual set of videos and activity sheets. The videos feature some of the satellites on display, and introduce viewers to light waves and how the James Webb Space Telescope will utilize different wavelengths of light. They even include a fun activity inspired by one from the NISE Network’s Explore Science: Earth and Space activities. 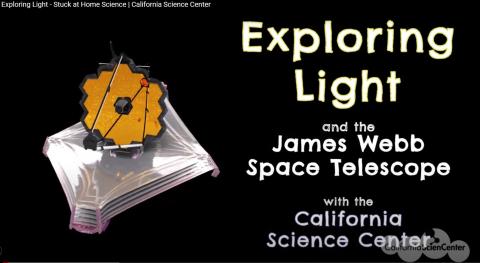 Usually, for a big occasion like a telescope launch, the Education Department at the California Science Center would host an in-person event with a hands-on activity, and some interactive resources. However, with unknown restrictions due to COVID protocols, they decided to film a video, while still including a hands-on and interactive component. They wanted to create a fun, informative resource for audiences of all ages that connected back to Science Center exhibits. To create the video, they used a simple set up: a cell phone camera and a bluetooth microphone to enhance the sound. Elaine cut the videos together, and added images and animations before sending the videos to Science Center staff to proofread. The week before the launch, the videos and corresponding activity sheets were released on the website and social media, along with podcast episodes by the Exhibit Development department. The videos were also sent to community partners to use with their families and in their programs.

In the video, Elaine and Evelyn highlight different exhibits and introduce viewers to different types of light. 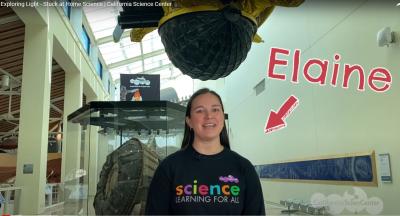 The videos also include activities that require simple supplies. The “Filtering Light” activity was inspired by the “Filtered Light'' activity from NISE Network’s Earth and Space Kit. The video includes an adaptation if viewers don’t have a light filter, and shows them how to create one using water and food coloring. This activity is intended to have a wide variety of uses from formal and informal classrooms, to outdoor education activities, to on the floor of a museum or learning center. Younger children can marvel at the difference between colors, while older students can observe the effect of light wavelengths.

The first set of videos, “Exploring Light” and “Explorando La Luz” can be viewed on YouTube, and the corresponding activity sheets can be downloaded here on the website.

In recent surveys, many community partners expressed interest in learning about radio waves and communications. In response to this, the California Science Center created two additional videos exploring how the James Webb will utilize radio waves. They plan to release the two videos in English and in Spanish in the coming months. Stay tuned!