Partner Highlight: From NanoDays Kits and a Building with Biology Public Forum, to Kicking-off the Statewide Tennessee STEAM Festival, Collaboration is the Key!

Preston MacDougall is starting his 25th year as a Professor of Chemistry at Middle Tennessee State University.  Late October has always meant trips to elementary schools to celebrate National Chemistry Week by letting kids have some hands-on fun with matter at the nanoscale.  Whether it was making cross-linked polymers out of Elmer’s Glue with the help of the borate ions in Borax, or making solutions of anthocyanins from red cabbage that change color in an instant.  The joy of chemistry originates at the nanoscale, even if those being delighted don’t know it.  Then along came the NISE Network’s NanoDays kits that were professionally designed to help children understand the structure of matter at the nanoscale, and experience some of the wonderful properties that are key to technologies that children learn to love at an early age.  Around the same time, Preston’s wife, Tara left a career in the financial sector to become the CEO of the Discovery Center at Murfree Spring, the much-loved children’s museum in Murfreesboro that is known for its playful and engaging exhibits.  NanoDays in the Spring became another annual celebration of the wonders of matter at the nanoscale, and an opportunity for Preston to collaborate with his wife and Discovery Center staff on ways to use the kits in programs and exhibits.  When the Science Demonstration Room needed a makeover, and became the STEAM Lab, the Nano influence was easy to see!

When the Nanoscale Informal Science Education Network’s initial NSF grant expired, and the National Informal STEM Education Network was born, with an initial emphasis on educating the public about synthetic biology, Professor MacDougall, being a chemist, started some new collaborations.  With a mini-grant from the new NISE Network, and a Build with Biology kit to engage children and parents in hands-on activities helping explain the nature of synthetic biology, he recruited a fabulous young investigator, Dr. Ritu Raman (now a L’Oréal Women in Science Fellow at MIT) who was known for building BioBots, to come to the Discovery Center to give a Science Café presentation on “BioBots: Building beyond Biology”.  This presentation about the exciting promise of synthetic biology was followed by a Public Forum on "Should We Engineer the Mosquito?"  This required additional collaboration, including a public health expert with global experience, and a Professor of Biology with expertise in toxicology and ecology, who joined Dr. Raman and over 40 community members who had a lively and education discussion moderated by Preston.  An additional collaboration was with the Nashville Section of the American Chemical Society, who have sponsored the series of Science Cafés at the Discovery Center since 2013.  For the novelty and impact of this event, the Nashville Section was awarded an American Chemical Society ChemLuminary Award in for Best New Public Relations Event in 2016.

In the meantime, Preston and Tara will collaborate in yet another way; as a presentation tag-team duo at scientific meetings.  When they were married almost 36 years ago, Preston was a Chemistry student at McMaster University in Canada, and Tara was pursuing her degree in English at the University of Toronto.  They imagined all sorts of “collaborations” lay in their future, but they never could have imagined that they’d be speaking together at the 2015 NISE Network-Wide Meeting in St Paul, Minnesota, and then during the Presidential Symposium on “Science Cafés and Engaging the Public” at the ACS National Spring 2018 Meeting in New Orleans – with hot beignets for attendees!  If you’re planning to be at the ACS’s National Meeting in Boston this August, come by and learn more about the Tennessee STEAM Festival during the symposium organized by the Boston Museum of Science’s David Sittenfeld, and Doris Lewis, Professor Emerita from Suffolk University.  It will be on “Informal STEM Education: Innovation and Collaboration” (emphasis added by the NISE Network).  However, don’t come expecting free beignets! 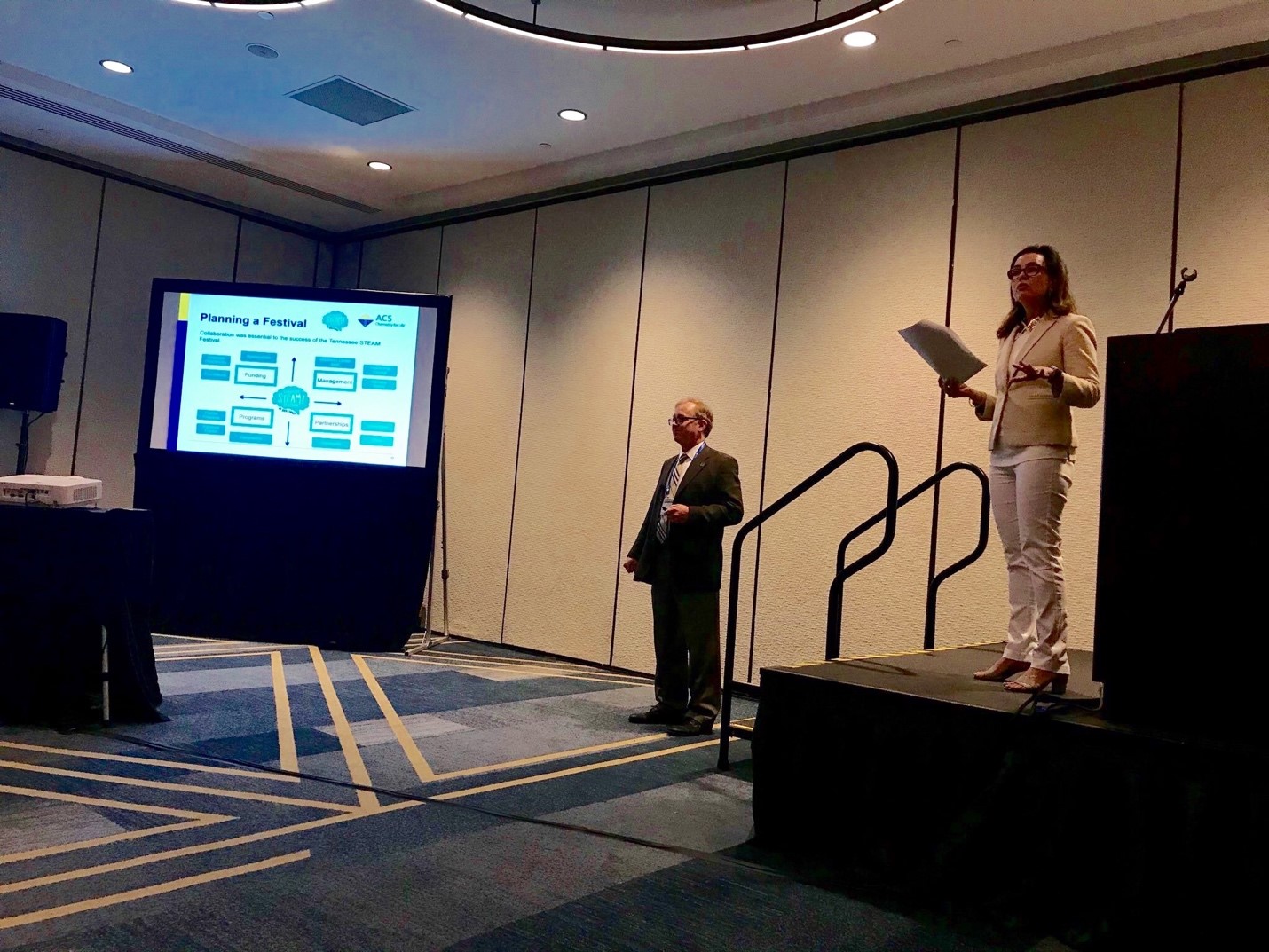 Preston and Tara MacDougall speaking on academic/museum collaborations at the ACS meeting in New Orleans, and enjoying beignets afterward, compliments of Peter Dorhout, 2018 President of the American Chemical Society.