Welcome to the monthly e-newsletter for the National Informal STEM Education (NISE) Network and community.

We are pleased to announce the new project, ChemAttitudes, funded by the National Science Foundation. The ChemAttitudes project is a collaboration between the NISE Network and the American Chemical Society, and builds on the existing NISE Net infrastructure to raise the capacity of museums and informal science educators to engage the public in chemistry. Using design-based research, this project will develop a kit of educational activities that point the way to greater interest, relevance, and self-efficacy among museum visitors and those who attend events like National Chemistry Week. Two-hundred and fifty (250) physical kits will be developed and distributed in 2018 to partners through a competitive award process. Learn more about this new project at http://www.nisenet.org/chemattitudes.
→  NISE Network announces application for free Explore Science: Earth & Space toolkits of hands-on activities

The National Informal STEM Education Network (NISE Net) is pleased to offer 250 free Explore Science: Earth & Space 2017 toolkits to new and existing eligible partners in the US. In collaboration with NASA, the NISE Network has assembled a new set of engaging, hands-on Earth and space science experiences with connections to science, technology, and society. In addition to the physical toolkits, all digital materials will be available online for free download in February 2017.
→ Building with Biology: Engaging the public in conversations about synthetic biology

The Building with Biology project continues to support events across the United States as we head into the fall. Events have varied in size and location, from urban to rural, children's museums to science centers, universities to community festivals, and much more. The feedback we receive from event hosts and scientist volunteers is beneficial as the NISE Network continues to explore public engagement in science topics and new projects. Final event reports are due three weeks after hosting your last event and/or forum. Instructions for completing the report can be found at http://www.buildingwithbiology.org/get-involved. Don't forget to share your events, activities and conversations with us on social media: #buildingwithbiology
→ National Informal STEM Education (NISE) Network transitioning to new regional hub structure

Read the interview by Geoff Hunt, outreach manager for the American Society for Biochemistry and Molecular Biology (ASBMB), with Larry Bell, senior vice president for strategic initiatives at the Museum of Science in Boston about the Nano Informal Science Education Network, how it began, and its transition into the National Informal STEM Education Network.
UPCOMING EVENTS
→ Upcoming online workshops: Staying connected to the Network and community 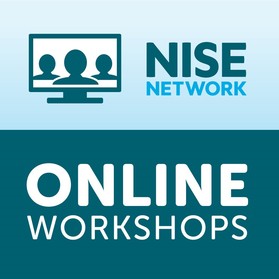 Please join us for a series of upcoming online workshops for the new Space and Earth Informal STEM Education (SEISE) project. There is no charge to participate in any of the online workshops.
Online Workshop: New Earth and Space Toolkits
Tuesday, September 13, 2016
2pm - 3pm EDT
Join NISE Network partners for an introduction to the new Space & Earth Informal STEM Education (SEISE) project and learn how your organization can become more involved in this exciting new opportunity. In this online workshop, we'll present a general introduction to the project and an overview of what’s in the new Explore Science: Earth & Space toolkits, including information about how to apply and eligibility requirements. Sign up for this online workshop

→ Association of Science-Technology Centers (ASTC) Annual Conference 2016
We look forward to seeing many partners at the upcoming ASTC Conference later this month in Tampa, FL. The NISE Network is hosting a number of activities that we hope you can join us for. NISE Network activities at ASTC include:
→ Celebrate National Chemistry Week 2016: Solving mysteries through chemistry
This year's National Chemistry Week (NCW) theme "Solving Mysteries Through Chemistry" focuses on the chemistry of fibers and forensics and takes place October 16-22. This annual event encourages chemists and chemistry enthusiasts to build awareness of chemistry at the local level to promote its value in everyday life. For NCW resources, visit the official website. You can also find NISE Network chemistry-related activities at http://www.nisenet.org/national-chemistry-week.

→ NanoGagliato: Where science meets the people in Calabria, Italy
Inspired by the senior scientists’ gatherings in Gagliato, Italy, NanoPiccola, which is the junior extension of the Accademia of Gagliato, launched NanoPiccola days offering children in the local community an opportunity to learn about nanotechnology and its applications. NanoPiccola days is a program that includes hands-on activities and games, presentations, scientist trading cards, and Q&A sessions between scientists and the public. In 2010, the Houston Methodist Research Institute became a partner of the NISE Network, and NanoPiccola an international collaborating partner. Upon joining the Network, the Accademia was able to improve upon their own line of activities and experiments, and a Network from which to draw further inspiration and support!
→  Connecticut educators learn to "Build with Biology" with Southern Connecticut State University Faculty & 2016 iGEM team
This past August, middle and high school Connecticut educators participated in a Building with Biology professional development workshop with Southern Connecticut State University (SCSU) faculty, which was a collaborative event coordinated by CRISP and the Office of STEM Innovation & Leadership. Educators discussed the social and ethical implications of synthetic biology along with SCSU's first ever iGEM team through the forum "Should We Edit the Genome? When, Why, and How Much?"
→ Engineering inside and out at Science Central in Fort Wayne, Indiana
Science Central paired their Building with Biology event with Fort Wayne Indiana's annual Three River Festival, where they were able to collaborate with a local architecture firm for an engineering egg drop competition from their rooftop. This event also allowed Science Central the opportunity to premiere the Building with Biology hands-on activities for participants and to highlight that engineering happens on the micro scale too by engaging in conversations with scientists from local universities facilitating the activities.
Social media NISE Network partner shout-outs
Smithsonian's National Museum of Natural History in Washington, DC
Synbio and gene editing at today's #buildingwithbiology forum @NMNH - should we release gene-drive mosquitoes?
#buildingwithbiology Answers include animal-friendly food, cheap medicine & my fave "There will be a fluffy giraffe"
Cornell iGEM visits Syracuse, NY
Cornell iGEM takes on the New York State Fair! Spreading the word about synthetic biology #BuildingwithBiology
Amalthea Ridge in Great Falls, VA
Fun #BuildingWithBiology event in #GreatFallsVA, teaching children the wonders of biological systems and components
Genspace in Queens, NY
@genspace #iGEM team ponders ethics of gene drives @nysci public discussion
Southern Connecticut State University STEM-IL in New Haven, CT
A huge thank you to the @SCSUiGEM team for leading #buildingwithbiology outreach @SCSUtweet

SCIENCE IN THE NEWS
→ Nano News
Nanoparticles that speed blood clotting may someday save lives
Severe trauma resulting in internal bleeding is a top killer of children and younger adults. Currently, doctors are only able to use surgery to stop blood loss inside the body, however, researchers recently shared their work that used nanoparticles to help with blood clotting for treating internal bleeding. Delivered intravenously, the nanoparticles act as a bridge, binding to activated platelets and helping them join together to form clots. Initial studies have shown this process to work in stopping internal bleeding in rodents, but the next stages are proving this to work in human blood without triggering an immune response to fight off the nanoparticles. Researchers have also developed these nanoparticles that are stable at higher temperatures and are hopeful that one day they'll be used to save lives from the ambulance to the battlefield.
→ Synthetic Biology News
National Institutes of Health (NIH) moves to lift moratorium on animal-human chimera research
Last September, NIH announced it was suspending funding for studies that introduce human stem cells into animal embryos while the agency considered the ethical issues; NIH was not yet funding these studies but rather this put a hold on future federal support. Now, NIH is considering revising their policies and lifting a moratorium on funding for experiments that add human stem cells to animal embryos, creating an organism that is part animal, part human - known as a chimera. Considered controversial by some, such experiments can be used to study human development, generate disease models, study mental illness, and potentially grow human organs for transplantation.
→ Earth and Space News
ESO Discovers Earth-Size Planet in Habitable Zone of Nearest Star
According to a team of astronomers using the European Southern Observatory's (ESO) telescope, located in Chile, they have discovered an exoplanet in what is considered the "habitable zone" orbiting our nearest neighboring star Proxima Centauri. Laying within the habitable zone means that the exoplanet is a distance from its star that allows temperatures mild enough for liquid water to form on its surface. Statistical surveys of exoplanets by NASA's Kepler space telescope reveal the likelihood of a large proportion of small planets orbiting small stars, but this discovery has still been met with much excitement. Many unknowns still exist including whether this exoplanet has an atmosphere, and if it does it could inspire more interstellar research and the eventual mission of a probe to that star system.
STEM THROUGHOUT THE YEAR
NISE Net's ideas for incorporating current science, engineering, and technology into holidays, seasons, annual events, and special events. Visit http://www.nisenet.org/seasons for more!